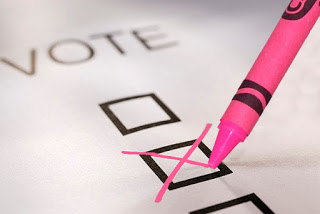 This week we had our annual leadership elections at school, and I decided we need to try our hand at doing it electronically. Why should we spend hours counting the votes manually, when I can be done within seconds online? However, if I am honest, I could have counted the votes three times over in the time I spend setting up and managing the online election. But hey, next year it will go a lot quicker.

Since we are a GAFE school, Google forms were the obvious choice for our election. Forms are not perfect for an election, but we are talking small scale, in a short time frame. Not much risk of election fraud here. All students have a login name, so I was able to set it so that each student can only vote once. At first, I thought I would have to record their usernames to ensure that they do not vote more than once, which put me in a bit of an ethical conundrum. Your vote is supposed to be secret, and even if I delete the username column, the moment I eliminated any double votes, it still did not sit right with me. A little playing around and I found the setting that allows you to limit the responses, without linking the username to the results.

My next and biggest problem was which question format to use. Each learner can choose up to 3 representatives, which eliminated the straight forward multiple choice since that will only allow one selection.
The appropriate format would be a tick box. It allows you to choose more than one option, and you can even set it to ensure that learners do not select more than 3. However, I found the resulting spreadsheet to be less than ideal. When you use a tick box, it groups the names chosen in a single cell.  I know it is still possible to automatically count them, using the “split” and “countif” formulas. There were so many doubters on the staff who was not convinced that an online election is a good idea that it was important that the result can be verified manually to set their mind at ease. To do this I wanted to use formulas as little as possible.

I ended up using a multiple choice scale, with only one option (at first). Luckily I decided to do a trial run two days before the actual election, because what I did not realise was that, on most devices, you were not able to unselect a person once you have selected them. The only solution I could come up with on short notice was to have two choices, “YES” and “NO”. Only the “YES” votes were counted, but if you wanted to undo a vote you just click on “NO”.

You might be asking yourself, “So what ended up taking so much time?” and you would have a point, as usual, the technical side was without a glitch, the problem came in on the human side. Learners are working on tablets, and most are signed in to their personal account and “supposedly” their school account. If you have more than one Google account on your device, you will be aware of the permission issues it can cause. Learners had to be signed in to school account, to ensure that no double voting takes place. Suddenly a whole bunch realised that they do not remember their password. Those that did the trail run like they were supposed to reset it the day before the election, but children being children, lots of them did not. Typically the ones who do not know their password was also the ones that did not do the trail. So on Wednesday morning while the election was already taking place I was frantically resetting passwords. (At least now most know their passwords.)

But still, that was not the biggest issue. Big was my disappointment when I logged onto the result sheets only to realise that just 60% of the learners voted. In any other election, a turnout of 60% would be considered high. But we are used to a 100% turnout, after all, the teacher used to put a paper in front of every learner, and they had to vote. I knew that if I used that result, it would just fuel the nay-sayers. There was no option; I had to ensure that every learner vote. So for the next two hours, I walked from class to class with my laptop, checking up that everybody voted. By the time I reach 90%, I decided that was good enough (luckily my principal agreed). It seems that if the form didn’t load immediately, or they did not know their password, some just didn’t care enough to do something about it. So much for caring who represent them.

At least I was right. The counting took only a few minutes. I did a quick count using “COUNTIF” to ensure that nobody voted for more than three representatives and deleted the few spoiled ballots. Interestingly, there were significantly less spoilt ballots than previous years. And then I totalled the votes.

Before first break, the results was on the principal’s desk.
All in a day’s work.