Technology means a sick day is not a lost day. 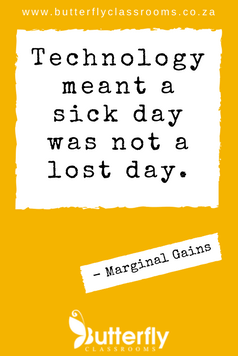 Marginal Gains are little things but when you put them all together, you have gained a lot of ground.

Most South African teachers will understand when I say that I don’t know how we are going to make this term. It seems like we are just back from holiday and already the exam is on us. So you can understand my frustration when I realised this morning that even though I spend the whole weekend in bed with a cold, I am still not well enough to go into school. I cannot afford to miss even one lesson at this stage. (Neither can I afford to cough all my germs over my learners and them also getting sick).

But I am happy to report that at the end of the day none of my classes was behind. Both my learners and I had a very productive day and all thanks to technology.

Google Classroom for a start, is a sick teacher’s best friend. Gone are the days where you colleagues had to run around to photocopy work for your classes. As I was sitting snuggly in my bed I looked through the work I planned to do. Luckily all my textbooks are on my computer, so I had everything at hand. You might have realised that I am not the biggest fan of electronic textbooks because they do not add anything to my teaching. But it is super handy to have all your textbooks available whenever you need them.

But technology gave me a new option. The Google Classroom app has a new feature (that I just discovered this morning) that allow you to record a video as part of an assignment. So instead of having to type the instructions out – we all know kids do not read instructions – I recorded a quick video, explaining what I wanted them to do. I would upload an example, but I would rather not expose the internet to my sick face and voice. To record four videos’s explaining what I wanted them to do took maybe 10 minutes, each video being around a minute in length. I did no retakes or editing, I just took my phone, told them what to do and posted it.

Twenty minutes later 3 of my classes was sorted out.
They knew what I expected them to do. If they got stuck during the lesson, they could post a comment to Classroom, and I could help. At the end of the lesson, they had to take a photo of the work they did and hand it in. This was the only part that did not work so well. It seems like they did not take that instruction seriously. Tomorrow I will be writing a bunch of debits, so that next time I do it, they will know that I am serious. If there is something that I have learned over the past year it is that kids have to be trained like puppies. If you want them to do something, you have to show them you are serious about it and that there will be consequences if they do not comply.

My biggest problem, however, was my grade 11’s. While the other classes were at a place in their work where they could continue by themselves, the grade 11’s had to do something new. And this is where the fun really started. I created an activity on Desmos (which I was planning to do in any case) and invited them to join the class. While I was sitting in my bed, I watched them work through the whole activity. The Desmos activity builder allows you to see each learner’s work as they work through the slides. It would even be possible to pause them all if they were on the wrong track and send them another video explaining what they are doing wrong. (If you haven’t had a look at the Desmos activity builder you really should take a few minutes even if you are not a maths teacher) So while they were working, I could keep an eye on what they were doing and send them hints, tips and comments via Classroom. (Desmos does not have a comment function since the teacher usually does not sit under her duvet while the kids work, so I had to use Classroom as a workaround.)

If you are not a maths teacher, don’t despair, I believe GoFormative provide similar tools, that is not limited to graphs and functions.

Is this the end of teaching as we know it?

Can we close schools and all sit behind our computers instead of in the classroom?
Of course not!
The only way my grade 11’s could manage to do something entirely new by themselves is because they could collaborate with each other. They might have been fine without me, but they would not have managed without each other.

Neither am I going to record videos for every assignment/announcement on Classroom. I am also not in any way advocating that teacher do not deserve a day in bed if they are sick. But the fact is combining all these things meant that my kids didn’t need to miss out on a day of learning, just because I am sick. Neither do I have to deal with the stress of catching up on the work we missed out on. Technology allowed all of us to be productive even while I was sick.

Have you used technology to keep the show on the road while you were sick? What did you use? Did it work? Share your experiences with us.

How to create custom Trig grids in Desmos

Station-Rotation model – Tips and tricks from the maths class